From 08 June to 25 August 2013, 170 photographs by Lewis Hine (1874-1940) were shown at the Museum of Photography in Winterthur (Switzerland). While in the past I had come across some of this photographer’s images, learning more about his work and his motivations was a discovery.

Hine, trained as a teacher and sociologist, used photography to document the life of workers. Some of his subjects were child labour, the construction of the Empire State Building and immigrants landing on Ellis Island, New York.

The exhibition was organised around series of images corresponding to distinct projects he worked on. I was interested to observe how Hine’s photography changed depending on the subject and over time. The series on Ellis Island mainly showed portraits of women and children. In many of them Hine exploited the background to highlight the immigrants’ mood, mostly grim and sad. Good examples can be found on the website of the Museum of Modern Art (New York).

Hine is especially known for his series of photographs on child labour that was used by the National Child Labor Committee (NCLC) to instigate social reforms. Hine skilfully displayed the mostly unwelcoming environment in which children had to work and live. Of the many photographs available on the internet, I selected four of them that illustrate Hine’s skills and purpose.

One of the spinners in Whitnel Cotton Mfg. Co. N.C. She was 51 inches high. Had been in mill 1 year. Some at night. Runs 4 sides, 48 cents a day. When asked how old, she hesitated, then said “I don’t remember.” Then confidentially, “I’m not old enough to work, but I do just the same.” Out of 50 employees, ten children about her size. Lewis Hine (1908). Courtesy the Library of Congress, D.C. Washington. 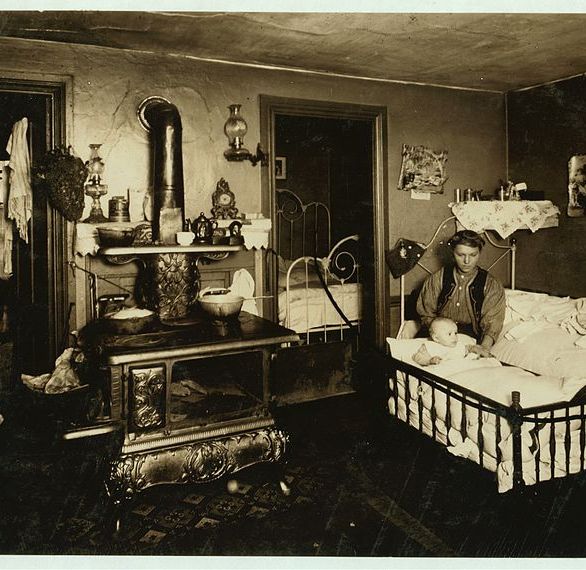 I was impressed by Hine’s work. The photographs I saw were at the same time of great compositional beauty as well as of surprising technical quality. Researching his life, I became more aware of the technical challenges he faced. While later, he used a film based camera, in particular for his series on the construction of the Empire State Building (early 1930s), Hine used glass plate equipment to capture the working conditions of children for the NCLC. As cited in the introduction to the “National Child Labor Committee Collection” of the Library of Congress, the photography historian Daile Kaplan (1992) described how Hine adopted various roles, such as insurance salesman or industrial photographer, to gain access to factories. Then, thanks to his experience in interacting with children gained as a teacher, he would quickly establish rapport with his subjects and setup his gear. Yet, when met with resistance and animosity from factory management, he would nevertheless stand outside the factories at the beginning of working shifts to take photographs.

Given that at the time, Hine was using glass plate cameras, the results appear to me as an amazing artistic and technological feat.

As a precursor to documentary photography (International Center of Photography, 2014), Hine’s stance towards the artistic side of photography is ambiguous. While his photographs of child labor were a great help in promoting better legislation to protect the vast population of underage workers by documenting their lives with “quasi-scientific objectivity” (Johnson, 2013), it also appears that he would not hesitate to stage his pictures (ibid.) or radically change the description of the subject depending on the final use of the picture (ibid.).

Clearly, Hine understood his photography first as being a tool to raise awareness before being an art. As described in a contemporary news article, “Mr Hine is not the sort of photographer who gets himself known as ‘art’ photographer […] In his pursuits as a sociological investigator and recorder, Mr Hine has, whether consciously or not, employed his instincts as an artist” (Letters and Art, 1920).

Later in his life, Hine produced bodies of work showing more artistic qualities. In particular two projects demonstrate his interest in celebrating the great American industrious spirit. With his series on “work portraits” (Clark, 2014), he intended to display the role played by manual workers in the American economy. Another project that made him famous, was the documenting of the construction of the Empire State Building (1930-31). Yet, while his purpose was “to humanize those most at risk of losing their humanity” (Johnson, 2014), the beauty of the resulting photographs could be seen as putting “too pretty a face on society” (ibid.), thus undermining Hine’s generous intentions.

The above made me think of one of the achievements that photography has attained: “Indeed, the most enduring triumph of photography has been its aptitude for discovering beauty in the humble, the inane, the decrepit” (Sontag, 1977, p.102). Therefore, it is quite natural that Hine’s photographs as seen today offer a strong artistic appeal.

Contemporary to Hine’s work were the exploitation of a child workforce, an abundant immigration flow into the North American continent, the Great Depression and the start of the Second World War. This context is absent when I look today at his photographs. For example, it is only now when I think of it that I connect his images with the fact that still today many children’s lives are wasted working in far away sweatshops. I wonder how remote the middle class living in New York in 1908 felt from North Carolina or Alexandria and how concerned they could have become after seeing Hine’s photographs? Nonetheless, his work aroused awareness of the condition of child labour at the beginning of the last century (Johnson, 2013).

Some may accuse Hine of depicting a society as nicer than it may have been (Johnson, 2013). But this is easy. Sontag made the point that contrary to painting, age increased the beauty of a photograph: “Photographs, when they get scrofulous, tarnished, stained, cracked, faded still look good; do often look better” (Sontag, 1977, p.79). Indeed, Hine’s photographs are beautiful.

22 Mar This entry was published on 22/03/2014 at 12:39. It’s filed under Blog, Research and tagged lewis hine, OCA, Open College of Art, photograph, Photographers, photography. Bookmark the permalink. Follow any comments here with the RSS feed for this post.